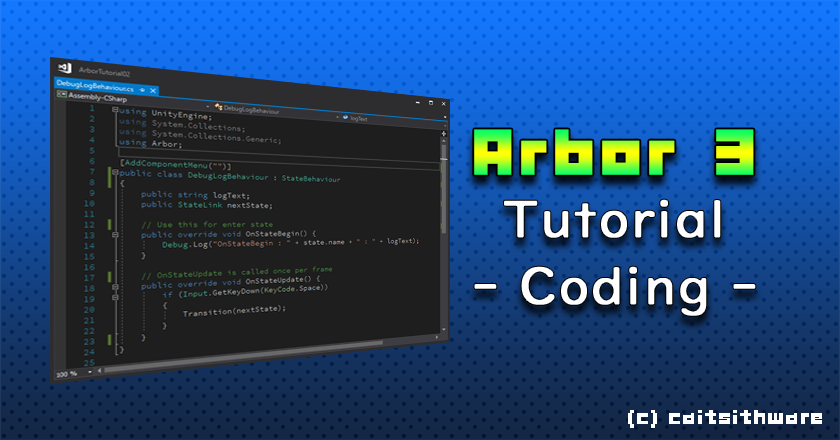 This time, we will explain how to create your own script, such as log output to know the timing of state change and definition of state transition by original condition.

This tutorial requires knowledge of:

If you use a different version, please read as appropriate because there may be some differences from the explanation.

First of all, please create a project for the tutorial.

For information on creating projects and importing Arbor, please refer to “Preparation for using Arbor“.

This time, let’s create a StateBehaviour that can set the behavior of the state. 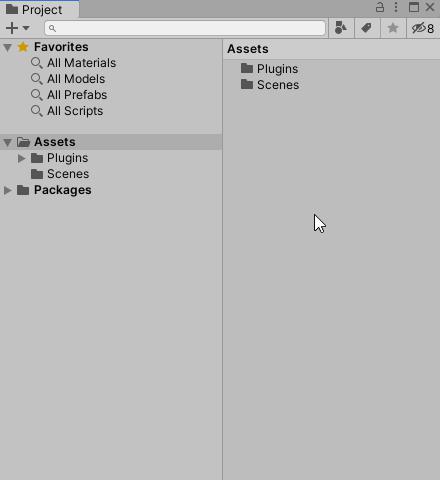 StateBehaviour is a script that can describe the state behavior of ArborFSM like TimeTransition and ActivateGameObject used in “State machine basics” section.

In addition to control for state, you can use editable parameters and callback like OnCollisionEnter like MonoBehaviour.

Double-click the DebugLogBehaviour file you just created to open it in a code editor (such as Visual Studio). 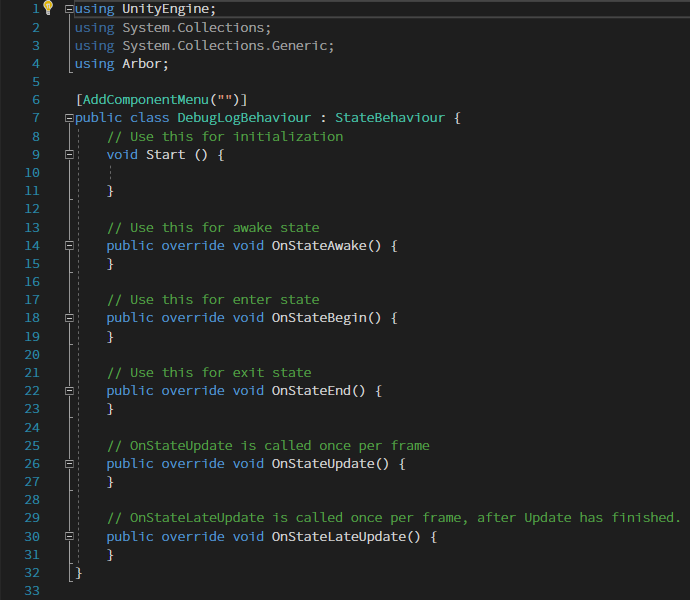 This OnStateAwake (), OnStateBegin (), and others are callback methods involved in state control.

In brief explanation, it plays the following role.

Also, if you have added multiple behaviors to one state, these callbacks are called in order from the top when you see them in the Arbor Editor window.

First of all, let’s check the logs displayed at the time of entering the state and make sure that the script is running normally.

In addition, we will only describe the edited places, so please understand.

Since the state setting script can be referred to by the state property, we also make state name out there in the log.

If you can write it, save the file and return to Unity.

Create an ArborFSM object to make the state machine available. 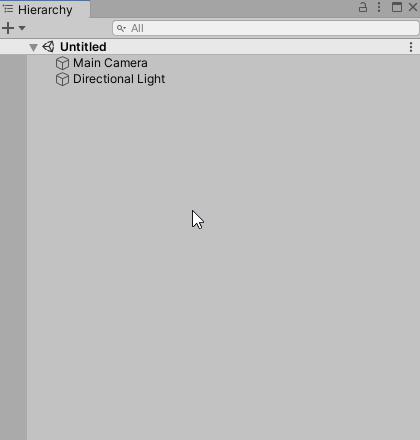 Display the created ArborFSM in the Arbor Editor window. 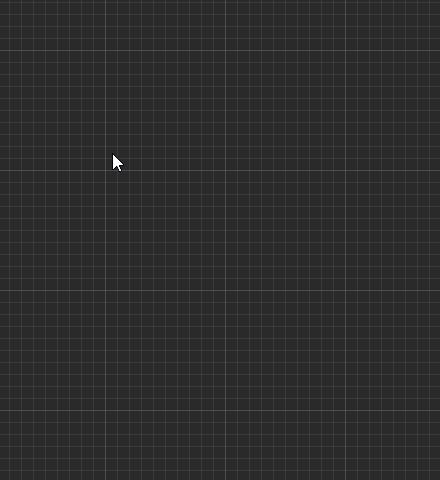 The created script will be stored in the Scripts group of the behaviour selection window by default. 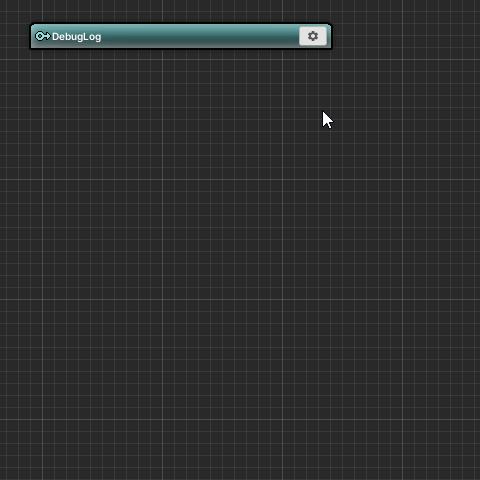 Since DebugLogBehaviour has no parameters, there is no need to set anything, so it is complete.

Confirm the operation so far

Let’s run once here and check it.

If the Console window is not displayed, select “Window> General> Console” from the top menu to display it. 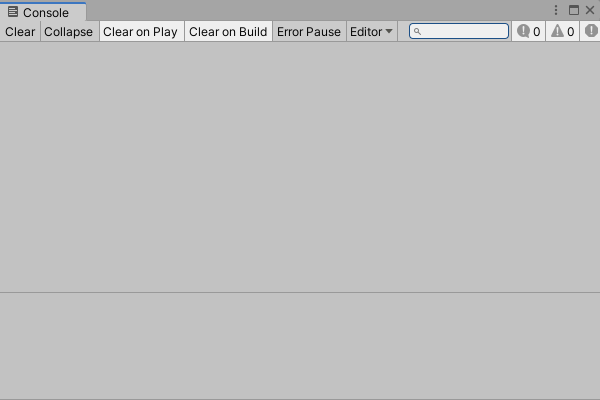 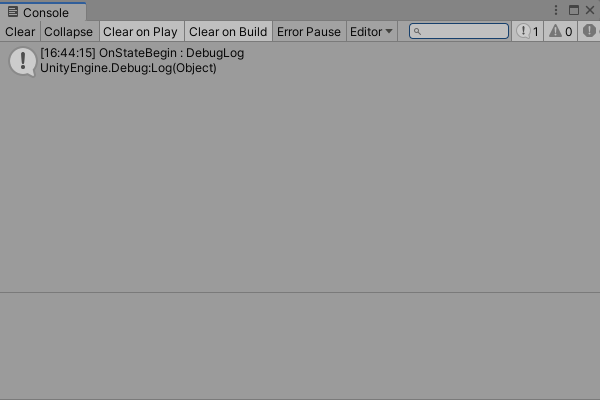 Then, OnStateBegin method of DebugLogBehaviour added to the DebugLog state is called, and the log described earlier is now displayed.

Next, let’s declare the parameters in the DebugLogBehaviour and allow it to be set in Arbor Editor.

Open DebugLogBehaviour in the code editor and define the member variables.

Since Arbor can declare parameters by Unity serialization function, the basic is the same as MonoBehaviour.

In this time, add a string to this DebugLogBehaviour and add it to the log with OnStateBegin method to confirm the operation.

If you save the file and return to Unity, it will be recompiled and the script changes will be reflected.

Looking at the Arbor Editor window, I think that the parameters added are displayed.

Confirm the operation so far

Play button” to put it in the execution state and look at the Console window. 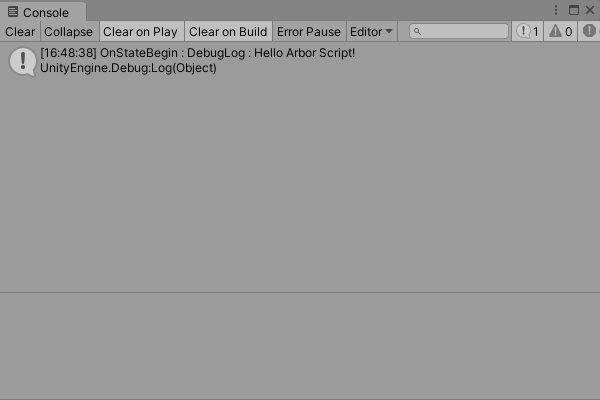 I think that you can see that the character string entered in Log Text has been added to the log.

In this way, you can edit the parameters added in StateBehaviour from the Arbor Editor and set the behavior.

When StateLink is declared as a member variable, a transition button is displayed and it becomes possible to specify it.

This time, I will make a transition when the space key is entered.

Let’s open DebugLogBehaviour in the code editor and modify the script.

Let’s save the file and return to Unity.

You can see that “Next State” has been added to the DebugLogBehaviour in the DebugLog state.

Since there is only one state, I will create another state and try to make the transition clearer.

This time we will duplicate the DebugLog state. 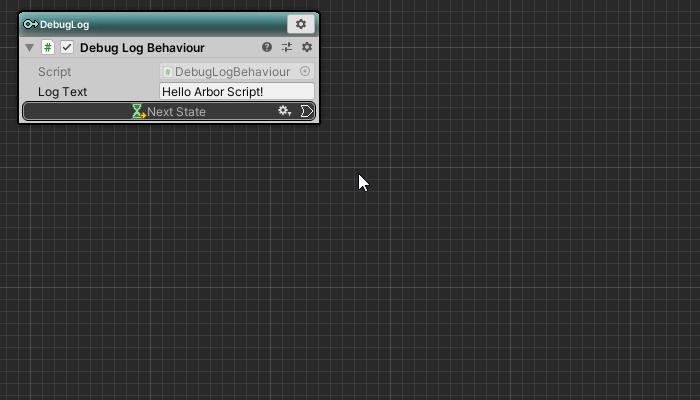 Change it because it is indistinguishable if the name remains the same.

Connect StateLink of each state to make transition.

Now the state transitions each time the space key is pressed, and the log is displayed in the Console.

Let’s check the operation at the end. 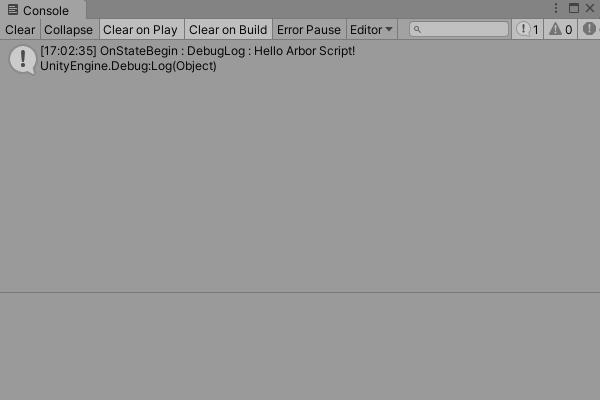 You can see that the state switches each time you press the space key and the log is output.

If you also check the Arbor Editor window, you can confirm that the state is switched normally.

Refer to “Data flow” for more detailed customization methods such as passing data between states and calculator nodes.

That’s it “Coding” is complete.

Next time is “Let’s make a coin pusher”.

I will create a simple game like a coin pusher using Arbor.