This is the documentation for Arbor 3.2.4 and earlier.

What is a Behaviour Tree?

It is the first active node to run the behavior tree.

You can connect with one child node.

How to control is described in CompositeBehaviour script.

You can also add Decorator scripts and Service scripts to be described later.

For reference on the built-in CompositeBehaviour see here.

The node that performs the action.

Write the ActionBehaviour script to see what action to take.

Also, we can add Decorator script and Service script here as well. It is a script that can perform condition judgment, suspend or interrupt an executing node, repeat judgment at the end timing.

This script is used in addition to composite nodes and action nodes.

For reference of the built-in Decorator, please refer to here.

Abort or interrupt target is controlled by AbortFlags.

It can be set by combining the above two flags.

Also, regardless of AbortFlags, condition judgment is performed once when its own node becomes active, and if it is false, it will be returned as a failure as it is.

Service scripts can be added to composite nodes and action nodes, scripts that can do something while the node is active.

Although it is not used in the example Behaviour Tree,

For example, it is suitable for describing auxiliary processing such as adding a Service that stores the distance to the player in Parameter to the Selector node.

Let’s take a look at the previous example again. 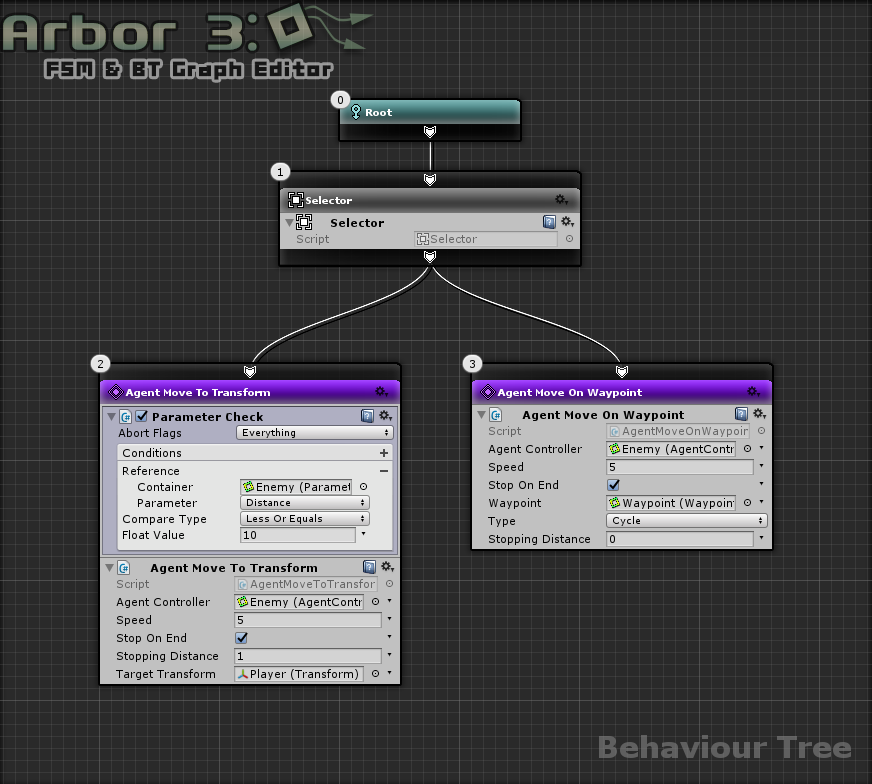 As you can see, the execution priority gets lower as going to the right, and you can see that interrupts etc. can be done by Decorator of the node with high priority.

Even if it is a simple example like this time, even a finite state machine can be assembled without making it particularly complicated,
In the case where the number of states is large and the condition is likely to be complicated, it becomes possible to combine state transitions that are easier to maintain because the condition tree can be described on the execution node side without the transition lines crossing in the behavior tree in the behavior tree.

How to use Behaviour Tree

For details on how to use, please click here

How to use Behaviour Tree